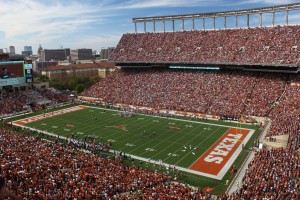 Even if not all Texans wear cowboy hats or ride horses, there’s one thing that’s consistent: the love for sports is intense and real.

Austin, by itself, does not have any national sports team. But a number of fans cheer for the San Antonio Spurs, Houston Astros and Dallas Cowboys. Yet their allegiance will always lie with the Longhorns.

This is a tradition that has carried on since 1893 making us just as passionate about high school football much like people from other Texan towns and cities.

Here are 4 places in Austin for sports fans:

This is one of the best experiences you can have even if you’re not a football fan. Whether it is tailgating or even game day tradition, you should find it to be unforgettable. During the off-season, you can still take a guided tour.

If you’re in Austin anywhere during the fall, just about any high school game will give you that proverbial Friday Night Lights experience. Westlake High School has one of the area’s leading program and many an NFL player has been picked from this school.

Apart from cheering from the stands of the DKR-Memorial Stadium, you can also enjoy a few beers, brats and barbecue at the Scholz Garten. This is the next best place to get a taste of that Longhorns experience in Austin. In fact, the biergarten and restaurant was opened 1866 and is actually even older than University of Texas football itself.

4: Circuit of the Americas

Austin has hosted the United States’ Formula 1 Grand Prix since 2012. This is the only Formula 1 race held in the United States. Of course, it also hosts a number of other racing events too over each year. It will also be a venue for the Summer X Games in 2015. There are tours you can take on weekends if you’d like to visit.