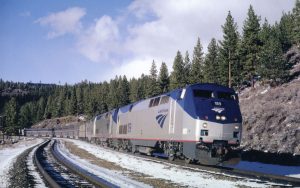 California’s railroad system grew largely out of necessity as the early forty niners rushed into the countryside to take advantage of the gold rush. The journey was nearly impossible from the East Coast, sailing around South American and covering some 18,000 nautical miles in the process. Those who sought a shortcut stuck to routes that ran overland, through some of the most treacherous parts of America at that time.

In order to avoid the hells of shipwrecks, cholera outbreaks and Indian attacks, there was a great demand for an intercontinental rail line. The first station in California came in 1855, which was a stopping point on the way through the Isthmus of Panama, as travel from that region had become quite practical.

Still, California didn’t really have a true connection to the United States until 1869, when the final spike was driven to connect the Central and Union Pacific Railways at Promontory Summit in Utah. Before that, a few local lines operated within state boundaries (the first being the Sacramento Valley Railroad line), but this was the first time one could expect to travel from Nebraska to California in a handful of days rather than weeks or months of travel through dangerous conditions.

Along with the railroads came the establishment of towns and settlements, which would eventually lead travelers into the mountains where they could mine vast mineral deposits to build wealth. Railroads have always been a great method to move people around the country, but it’s safe to say California’s early economy relied on its ability to move materials via rail line. Without those lines, some of which still exist today, the state might not be in the fiscal shape it’s in today (or throughout its history).