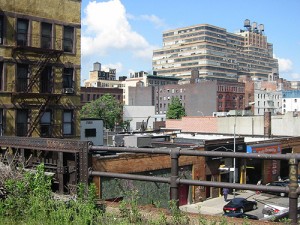 Most people outside of New York City think of Broadway when they consider theater in New York, but insiders know there is another destination you can go if you want modern dance or the latest in visual arts performances. Chelsea has been a cultural epicenter for New York City since the middle of the 1990s.

If the city of New York is a melting pot, then Chelsea is like a fondue. It’s been a multi-cultural space for decades, and has recently grown to become a Silicon Alley for New York City proper. It was also the center for New York’s LGBT population.

During the 90s, Chelsea became the destination for those looking to get away from the rising rents of SoHo. The upscale retailers and gradual decrease of artistic talent was forcing the remainder of the art community elsewhere into the city. SoHo’s galleries relocated to Chelsea. Chelsea also became home to the Rubin Museum of Art and home to several venues for live performances.

One of the more interesting projects to grow from this neighborhood is the Graffiti Research Lab, which is dedicated to testing new methods for graffiti artists to interact with the communities around them. Using lab and field experiments, groups test new tech like LED Throwies. These small, colored lights use magnets to adhere to surfaces and provide a non-destructive form of tagging.

The merging of technology with this cultural influence has created many intriguing visual arts projects, dance performances and theater. Chelsea is quite possibly a glimpse into the past, present and future of the modern American neighborhood.

About the Author: Phin Upham is an investor at a family office/ hedgefund, where he focuses on special situation illiquid investing. Before this position, Phin Upham was working at Morgan Stanley in the Media and Telecom group. You may contact Phin on his Phin Upham website or LinkedIn page.